By ordering and preforming new songs, APZ UP is constantly encouraging new achievements in the vocal area of our national music, making the treasury of it become richer. In all the years of its existence, the choir has been an important cultural ambassador of the University of Primorska and of Slovenia, and a promotor for new art works with their concerts and with a significant archive contribution of new works on CDs, all of which underlines the substantive exceptionality of the APZ UP projects

The choir performs under the auspices of Student Organization of University of Primorska (ŠOUP) since its establishment in 2004. In the choir, there are about 40 students of University of Primorska with some other choral enthusiasts. A composer and conductor Ambrož Čopi leads the choir. He has been leading it for the first decade of its activity and now again, since October 2016. His assistants, that help him with the leading of the choir, are Andreja Tomažič Hrvatin and Luka Vetrih. In the 11th and 12th season, the conductor was Mirko Ferlan. 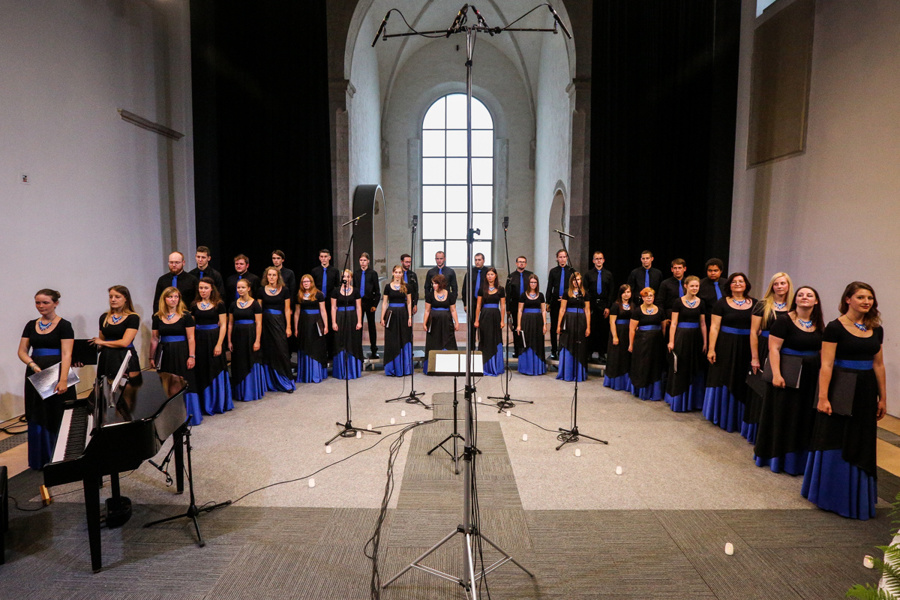 The Choir embraces a whole range of music genres and styles, from the Renaissance to modern music. Particular attention is dedicated to the compositions authored by the composers of the Primorska Region; moreover, the choir is enriching its repertoire with rarely performed works and novelties composed by the world composers and the younger generation of Slovenian composers. The choir engages with musicians from the Primorska region and cooperates with a variety of other national and foreign choirs, by hosting highly acclaimed concerts of quality vocal and instrumental music in the cycle Simfonic voices for non-profit it shapes an important part of culture landscape of the Slovenian coast in the last ten years.

Academic choir of the University of Primorska regularly performs at all major events organized by the University and arranges concerts in Slovenia and abroad. It is successfully presenting itself at national and international competitions; at Slovenian national choral competition “Naša pesem” the choir achieved four golden plaques (Maribor 2007, 2010, 2012 and 2014) with Ambrož Čopi and one silver plaque (2016) with Mirko Ferlan in the category of mixed choirs. One golden plaque was achieved in the category of female choirs (2014) with Ambrož Čopi. At a regional competition in Postojna (Slovenia) APZ UP received two golden awards with honours, one in 2011 with Andreja Tomažič Hrvatin and one in 2015 with Mirko Ferlan.

From the establishment on, APZ UP has published seven CDs. In 2008 the choir released its first CD with live recordings from the concerts given in the first three years of performing, APZ UP – v živo; another CD, Mysterium, featuring the selection of pieces from the fourth and the fifth season, followed in the spring of 2010. Cooperation with an ethno group called Vruja is presented on a CD named Istriantico and the fourth CD named Mozaiki features a selection of songs from concerts and competitions from the same period (2010–2012). The CD released on the 10th anniversary of the choir is named Sonority. It is a gift to the singers of the choir, as it holds records of the last two seasons (2012–2014), which were very successful for the choir. The choir performed many compositions on the record for the first time and some were performed for the first time in Slovenia. The program contains compositions sung in eight different languages and tries to present a young musical creativity of the region. In the same season the 6th CD, Tebe pojem (2014) was released. It presents orthodox legacy of composers of Primorska and it is the only one with this genre of music in Slovenia. The 7th CD called Fantazije (2014) is also the first CD by a young composer of Primorska Andrej Makor, who was a member of APZ UP in the past. It contains prime work of one if the most sought choral composers in the country and it is a holistic presentation of the coastal choirs (Youth Choir of the Music School Koper, Mixed Choir of the Gymnasium Koper, Mixed Choir Obala and APZ UP). The last CD - Lux was created on the occasion of the choir's 15th anniversary. The choir published sacral compositions by contemporary Slovenian composers, most of which were dedicated to the choir.